St. Joseph, Defender of LIfe, Pray for us! 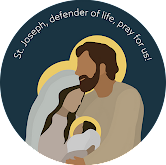 In October, we begin Respect Life Month , a time our U.S. Bishops have asked us to pray and act to rebuild a culture in which all human life is respected, cherished and protected, from the moment of conception until God desires to take that life home to Himself.   Because we are in the Year of St. Joseph, the Bishops have taken as their theme this month, "St. Joseph, defender of life, pray for us!"
Read more

The Supreme Court of the United States has scheduled the hearing for a major case on the ability of states to restrict abortion, which could have deep implications for the future of the horribly misguided Roe v. Wade and Doe v. Bolton decisions of 1973, which essentially require states to legalize abortion for any reason at any time in a mother's pregnancy.  The case is named Dobbs vs. Jackson (Miss.) Women's Health Organization.  They will begin the hearing on December 1st and probably make a ruling in June of 2022. Many Christian groups are initiating a prayer initiative for a just decision by the high Court, which would allow states to defend innocent life in the womb.   Please join them!
Read more

Archbishop Cordileone of San Francisco has become one of the staunchest advocates for the sanctity of life in the college of bishops.  It is well worth reading his comments on a recent bill being advanced by the Democrat party in Congress to codify a so-called right to kill children in the womb into federal law (from the National Catholic Register ). He quotes Pope Francis' recent comments during a return flight from Slovakia, during which the Holy Father said    ‘Abortion is more than a problem. Abortion is homicide…. It is a human life, period. And this human life must be respected."
Read more

A New York priest's reflection on 9/11 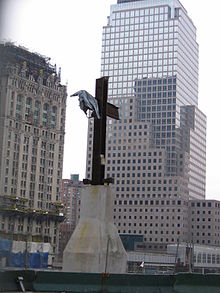 The Cross that was formed from the wreckage of the World Trade Center bombing on 9/11 A New York priest who lived just a couple of miles away from "Ground Zero" of 9/11 wrote a reflection on that incident within days of the terrorists attack. It is worth reading 20 years leader, because he powerfully reminds us that it is a wake-up call not to give in to the prevailing belief that God doesn't really matter in our lives.   It is also a reminder of the power of the Cross. As we approach the feast of the Exaltation of the Holy Cross on Tuesday the 14th, we remember that the meaning of each one of our lives revolves around the Cross of Calvary.  This is famously summarized in the motto of the Carthusian monks of the 14th century:  Stat crux dum volvitur orbis  (The Cross is fixed while the world turns).  No matter what time we live in our what is happening in current events, the saving death of Jesus on the Cross is the fulcrum, the pivot point, for all of human history.
Read more 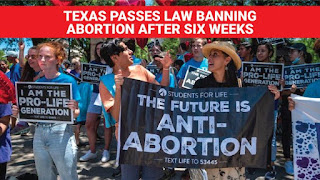 UPDATED: 9 Sep. 2021 The State of Texas recently passed a law, SB8, to restrict the killing of children in the womb who are more than six weeks old.   As expected, this has caused a furious reaction from the pro-abortion forces. Perhaps unexpected was that it was upheld, at least temporarily, by the Supreme Court of the U.S. That is in part due to its clever legal construction which makes private citizens the "enforcers" of the law rather than government entities. Sadly, and exactly as expected, Mr. Biden (a baptized Catholic who is increasingly rejecting the central truths of the faith )  is directing the federal Department of Justice to undermine the law .   Mr. Biden has recently claimed that he "respectfully disagrees" with those who believe that life begins at conception.  The cardinal archbishop of Washington, D.C., has reacted to that statement . The problem with Mr. Biden's statement is not only that it contradicts Catholic teaching, but also that it co
Read more

In the Community ... Sacred Art and Architecture

Every once in a while, I will post items of interests to Catholic in the Greater Cincinnati community. Here are a few coming up. * The Angelico Project is a foundation to promote goodness, truth and beauty through the sacred arts, with a particularly Catholic focus.  They are sponsoring an architectural tour of Mother of God Church and the Cathedral Basilica of the Assumption, both in Covington, Ky.  These are two of the greatest gems of sacred architecture in our region. In this holy Year of St. Joseph, they are also sponsoring an art exhibit in his honor entitled, The Work of Our Hands , with an opening exhibit in Mariemont. Please spread the word about these opportunities to evangelize the Catholic faith through the beauty of sacred art.
Read more
More posts

SCCR Parish
Blog for the parishioners of the South Clermont Catholic Region in New Richmond and Bethel, Ohio